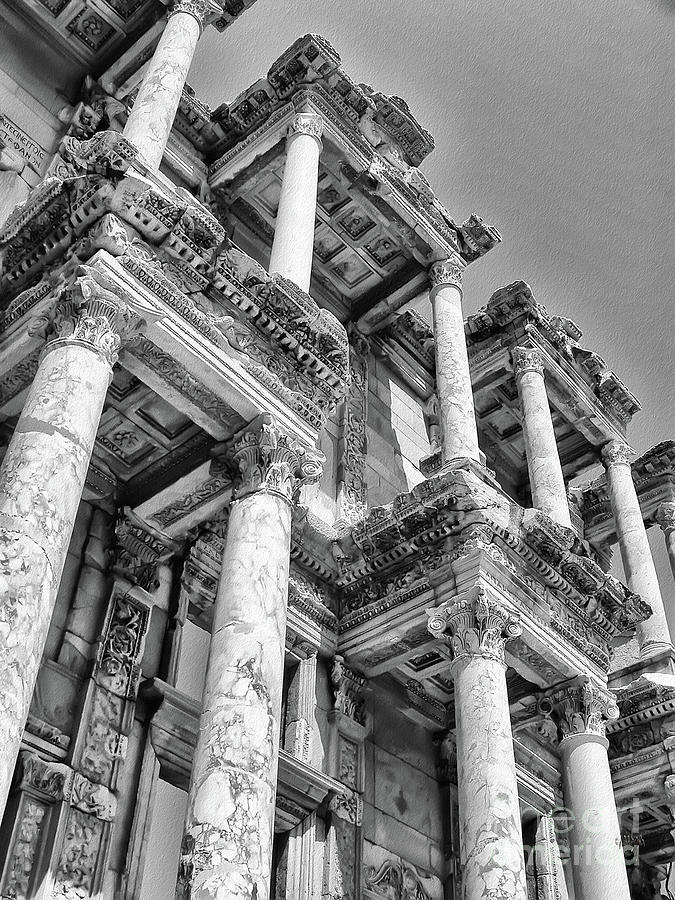 Our visit to the Mediterranean several years ago focused primarily on the ancient world. As a kid, somewhere I picked up the word archaeologist, and the romance and magic of the ancients infected me like a life-long virus ... one for which I've still never found the cure. What are you going to be when you grow up, Lois? An archaeologist, I'd answer. Back in those days (long, long ago) more often than not, I got expressions of puzzlement as a response. What the heck is an archy ... ??? What IS the child talking about???

One of the most astounding stops on our journey included a tour of the remains of the fabulous ancient city of Ephesus ... a Greek city built on the shores of the Aegean Sea in what is now three kilometres southwest of present-day Selçuk in İzmir Province, Turkey. Though the shores have long since silted over, and standing at the top of the main street you can not even see the water, in the 10th century, BC, all that was quite different. The ruins are so impressive that it's not hard to imagine the life of the bustling port city that once was.

Shown here is a capture of one of the crown-jewels of Ephesis, the Celcus Library. Named after the city’s former Roman governor and constructed in 117 AD, it became a repository of over 12,000 scrolls and one of the most impressive buildings in the then-Roman Empire.

Fine art purchases of this image will not include a watermark, and if I may make a recommendation ... this image will look its very best on the fine art paper choice of "picture rag."

Congratulations!! This stunning image has been selected to be featured for the week in the “Art for Ever with You” Group Home Page. You are welcome to add a preview of this featured image to the group’s discussion post titled “2019 March: Stunning Group Featured Images and Thank-you’s” for a permanent display within the group, to share this achievement with others. Also feel free to post your feature on our group Facebook page: https://www.facebook.com/groups/296998814248643/ . If the activity is allowed, your image will also be posted to Twitter. Thank you for your participation in the group! ~Jan (March 5, 2019)

I am infected with the same bug but with no means to travel to see it. Having the ability to see such amazing images such as this helps. To think this is 2,000 years old! Incredible. Your POV is stunning! L/F

Terrific perspective, fully capturing the grandeur and excellence of architecture. I never see remains like this without wondering, “What was it like, when this building was used, and full of people?”

A late Congratulations on your wonderful image which was featured Dec. 15, in the Women Photographers group! Thanks for participating in this group this year!

Lovely, Lois. Your processing really brings out the textures of the stone. lf

Congratulations on your feature in the Women Photographers group! LF

Thank you very much, Kay!!

love the texture noticed in his black and white.

Congratulations! on this unique image’s being Featured in “The Artistic Aperture” group, and also Liked, Favorited, and Facebooked.

Bob thank you so much!! I will tweet the group!!

Congratulations on your feature in the Fine Art America Group "Images That Excite You!"

Thank you so much, John!!! I will tweet the group!!

Beautiful!! The architecture really stands the test of time and would cost a trillion dollars to construct something similar today. Never knew you were so passionate about archeology, that's great! I always found the Rosetta stone to be quite an interesting and very important relic to decoding glyphs. ;)

Thanks John. And so true. Boy they really knew how to combine function and beauty, didn't they??

Amazing capture of the old world Lois. Love the angle and amount of details to view.

Neal, thank you. It was a tricky shot. I was actually shooting over the heads of about a thousand other tourists!!! ; )) It didn't matter to me, though ... I was at my highest moment of excitement in my life!!!!