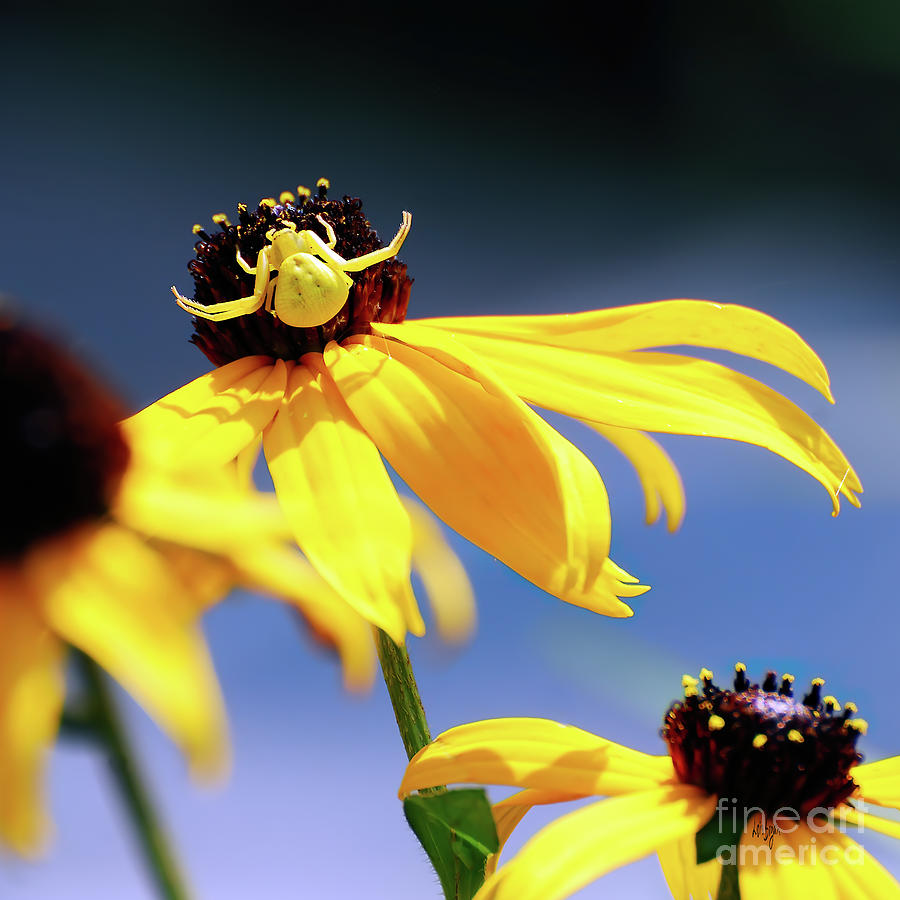 Found this adorable little cutie playing among the black-eyed-susans in my garden one morning. I'd seen spiders like this before, but they were all white. This amazing golden color is not a trick of Photoshop.

From Wikipedia:
"Misumena vatia is a species of crab spider with holarctic distribution. In North America, where it is the largest and best-known flower spider, it is called the goldenrod crab spider, because it is commonly found hunting in goldenrod sprays in the autumn.
Young males in the early summer may be quite small and easily overlooked, but females can grow up to 10 mm (without legs); males reach 5 mm at most.
These spiders may be yellow or white, depending on the flower in which they are hunting. Especially younger females, which may hunt on a variety of flowers such as daisies and sunflowers, may change color "at will". Older females require large amounts of relatively large prey to produce the best possible clutch of eggs. They are therefore, in North America, most commonly found in goldenrod (Solidago sp.), a bright yellow flower which attracts large numbers of insects, especially in autumn. It is often very hard even for a searching human to recognize one of these spiders on a yellow flower."

Hi Lois…I like your image. An interesting composition and quite effective. Well seen and photographed…Cheers Bob fv

Love this gorgeous capture Lois. What a find!

Great shot Lois, I like your title, perfect! FL

Wow he just knew he would look great sitting there! Nice shot LF

Gorgeous colours , I don’t usually like spiders but this one is okay 🌻

Amazing micro capture! I'm wondering how you ever spotted the little fellow.

Thanks, Deborah! I used to spend a lot of time in my garden with my camera ... on the lookout for butterflies!! Every now and then I'd find something different!!

Congratulations, your work is featured on the homepage of "Created by Southern Artists

It is with great pleasure that I announce to you a big congratulations for this chosen piece of your artwork to be on special display on the homepage of our community of friends and fine artists, in our Wisconsin Flowers and Scenery group. I appreciate your activity in our group and want to thank you so much for being an active participant in helping promote other fine artists within the group. Usually in turn, such promotions bring promotions of your artwork into perspective and are featured on our homepage. One good turn deserves another. Your quality, definition, character, and variation in your works bring about a visual pleasure to view and share with others. Thanks for your participation in our family of friends and fine artists in our WFS group.