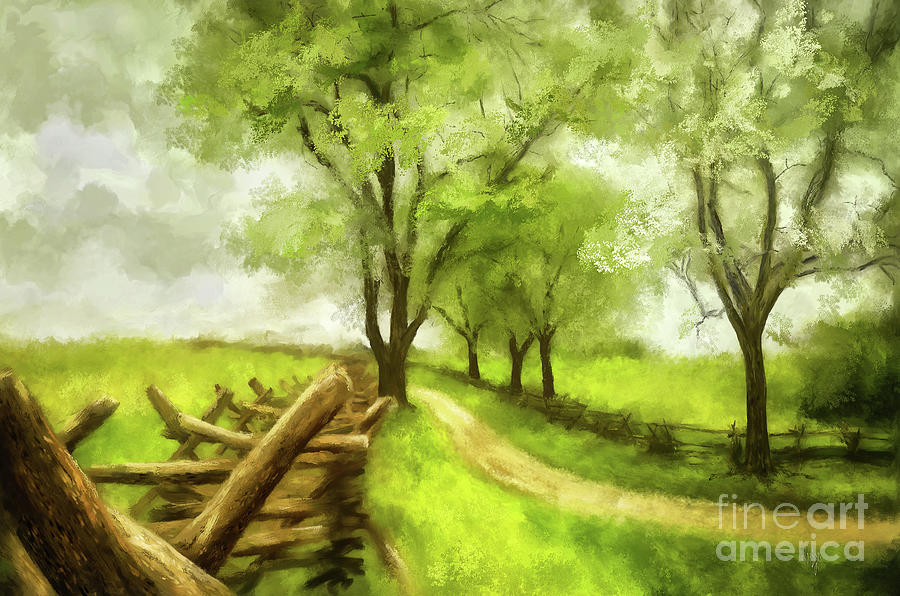 On a gentle, almost overcast spring afternoon when the sky is filled with soft clouds, sometimes the sun will momentarily overpower the cumulous layers and cast a warm glow across the landscape. On a recent visit to the American Civil War's Antietam Battlefield, in Sharpsburg, Maryland, I was witness to such a moment. As I gazed up the dirt road, I had a good view of one of my favorite things ... the intricate and beautiful snake rail fencing that is so much a part of the landscape here in our part of the Mid-Atlantic Area.

Also commonly known as split-rail fencing, and sometimes called Virginia fences, they were created by the early settlers in areas where wood was abundant. They are very simple in their construction, and can be assembled with few tools even on hard rocky ground. They also can be built without using nails or other hardware which was often scarce in frontier times. These fences are also popular in rocky areas where post hole digging is difficult. They can even be partially or wholly disassembled if the fence needs to be moved or the wood becomes more useful for other purposes. During the American Civil War, these split rail fences were a major source of firewood for both the Union and Confederate armies.

Directly behind me and to the right is "Bloody Lane" ... Civil War buffs will know its history.

Image painted by hand, digitally, and very loosely based on one of my own photos using Corel Painter 2019, a Wacom tablet and stylus and many beautiful digital brushes, including some of the popular Bob Ross brushes.

Fine art purchases of this image will not include a watermark, and if I may make a recommendation ... it will look its very best on the fine art paper choice of "picture rag."

Beautifully done. I've had the pleasure of shooting some of these fences my self. Yours are better!

This is very beautiful Lois. Faved

Carrie thank you!!! So happy you enjoyed it!!

Congratulations your wonderful work is now featured on Artist Salon 1! Please add your work to our Discussion archive for features.

Jeff thank you so so much ... I truly appreciate the honor!!! I have tweeted the group.

Of all the Civil War battlefields that I've been privileged to visit, this is my favorite. Great image, Lois. - Mike (V)

Thank you, Michael. It always pulls at my heartstrings ... I haven't visited too many of the battlefields, but this one really has such a strong presence of the past ... especially in autumn, of course. Glad you enjoyed the image.

The warm greens and sense of gentle depth are so beautifully explored in this Snake Rail fence scene Lois. So beautiful. F/L/TW.

Thank you so much, Randy!!

Such a beautiful scene with the winding road and pretty trees, along with your special touch!!!

Thanks so much, Lori ... so happy you enjoyed it!!

Thank you so much, Lavender!!

So sweet and so country, it makes me feel at home Lois, I love it! l/f/t

Thanks so much, Linda ... scenes like this one are a part of my whole life, too!!

Your description is really great, and the sense of light and mood in this image is glorious! l/f/p

Marsha, thank you so much for your lovely note!!!

So very beautiful, Lois. I loved reading your description and learning about these fences. As with Gettysburg and other Civil War sites, the beauty you have portrayed here is such a contrast to the battlefield history, yet it honors the fallen. That's just one thing I love about it. Congratulations on your features!

Connie, most sincere thanks for your thoughts ... yes, the contrast of the scenes I see today ... and the history they represent is such a contrast. I am glad you feel that my interpretations honor those who fell. Thank you again!!

Congratulations - Your beautiful artwork has been featured in the "Travel Art" group! For further promotion, you can post it to the specific Travel Destinations galleries, our Facebook group and our Pinterest board - all the links are provided on our group's homepage: https://fineartamerica.com/groups/1-travel-art.html * You are also invited to post it to our group's blog: travelartpix.com for worldwide exposure!

Thank you so much, Tatiana!!! I have tweeted the group!!

Amazing landscape painting, love the colors, and the vivid effect of the trees! l/f

Lovely as can be. FAVORITE! L/F

Wonderful artistry, I love your detailed work on the trees !

Jim thank you!!!! And thanks for noticing the trees ... they were fun to experiment with!!!

Congratulations Lois, your outstanding artwork has been featured on the leading page of Impressionism group! Please take a moment to visit the group and view it there as it has been carefully arranged and displayed on our gallery wall with other fantastic artist’s works. Also, feel free to add it to the featured art archive in the group’s discussions as well. Excellent work! Lori

Most sincere and humble thanks, Lori ... always an honor to see something of mine among the fabulous images you curate!!!! Thank you, thank you!!!

Congratulations Lois, your work is Featured in "Photographic Camera Art" I invite you to place it in the group's "2019 Featured Image Archive" Discussion!! L/Tweet

Don many sincere thanks!!! I have tweeted the group and will add the image to your discussion!!! thank you again!!!