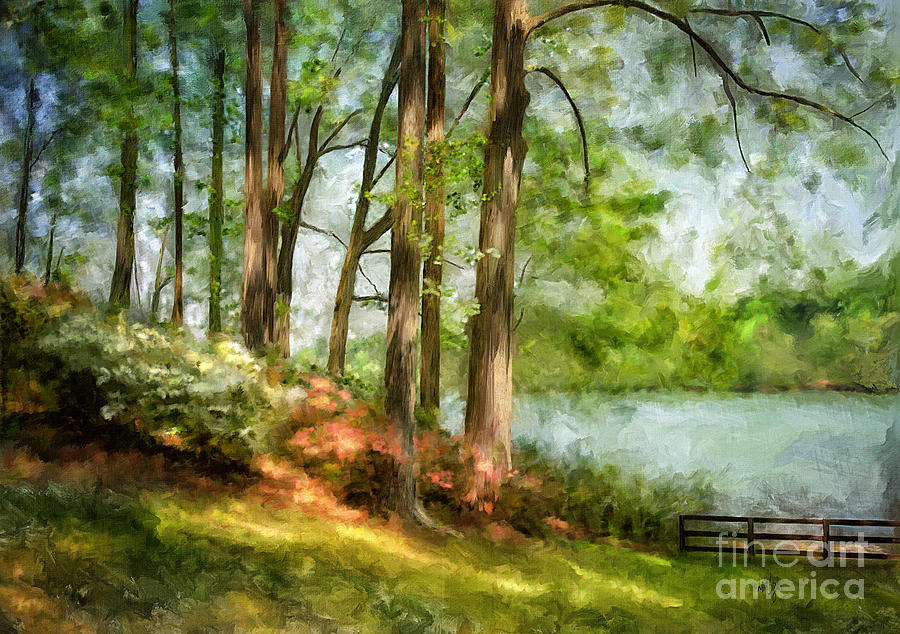 Tridelphia Lake In May

Tridelphia Lake In May

A sun-dappled vision of a perfect spring morning including a peaceful view of Tridelphia Lake, located on the border of Montgomery and Howard Counties, Maryland, USA. This lovely area is part of the Brighton Azalea Gardens, owned and maintained by the Washington Suburban Sanitary Commission, which opens its gates to visitors each spring. At its very best right around Mother's Day when the magnificent azaleas are in bloom, a visit here is a treat for the eyes and the soul. Beautifully laid out paths and seating areas invite quiet moments of enjoyment and reflection. I must send my congratulations to the people at WSSC for the truly excellent job of weeding, clearing and re-planting many areas which in previous years I noticed had been looking a bit sparse and neglected. Looks great now!!

Tridelphia Lake actually has a fascinating history. Beneath its waters lies a once-thriving mill town, named Tridelphia (three brothers) for the three brothers who founded it.

Here is what Wikipedia has to say about it:

"The reservoir is located on a land grant surveyed by Benjamin Gaither in 1725. It was named after the town of Triadelphia which was founded in 1809 by three Quaker brothers-in-law. Isaac Briggs, Thomas Moore, and Revolutionary veteran and silversmith Caleb Bentley built a small town on 276 acres of land with nine houses, sawmill, general store, grist mill, and a mill race. The property was expanded to 515 acres containing the land grant "Benjamin's Lot" and "What's Left". The Triadelphia Cotton Factory (Montgomery Manufacturing Company) managed by Allen Bowie Davis operated 196 spindles from its waterwheel and grew to several dozen buildings by 1850 including Mt.Carmel Methodist Church and a schoolhouse. In 1868 a flood washed away a portion of the city and a second flood destroyed most of the remainder. The Triadelphia Turnpike company operated a toll road from Triadelphia, to Glenelg to the Baltimore-Frederick Turnpike, now labeled Triadelphia road. By 1905 the town was mostly abandoned. The Ligon family purchased the land using it for storage and tenants until it went underwater with the construction of the reservoir." http://en.wikipedia.org/wiki/Triadelphia_Reservoir

Congrats on your sale Lois!!

Congrats on your sale!!

Congrats on another Friend!!

This is totally totally lovely the colors in the use of light so beautiful.

Luther Fine Art 2 Days AgoCongratulations! Your fantastic photographic art has been chosen as a Camera Art Group feature! You are invited to archive your work in the Features Archive discussion as well as any other discussion in which it would fit.

BRAVO! Your beautiful artwork has earned a FEATURE on the homepage of the FAA Artist Group No Place Like Home, 5/07/2019! You may also post it in the Group's Features discussion thread and any other thread that fits!

Congratulations Lois, your outstanding artwork has been featured on the leading page of Impressionism group! Please take a moment to visit the group and view it there as it has been carefully arranged and displayed on our gallery wall with other fantastic artist’s works. Also, feel free to add it to the featured art archive in the group’s discussions as well. Excellent work! Lori

Congratulations, your work is featured on the homepage of "Created by Southern Artists"

Congratulations Lois, your work is Featured in "Photographic Camera Art" I invite you to place it in the group's "2019 Featured Image Archive" Discussion!! L/Tweet

Lois, this is absolutely breathtaking work... Lovely textures, lighting and such a peaceful, magnificent composition! Congratulations on your awesome sale! F/L

Congratulations on your sale, Lori!

Congratulations on your sale Lois!!! :-)

Beautiful Lois, Congratulations on your Sale!...f/l

Congratulations on your sale. Lois!

A really lovely picture of trees and lake Lois.So enjoyable to view